There are an estimated 22,000 different species of plants in South Africa. This makes up nearly 10% of all the plant species on earth. South Africa is the only country that can claim to have one of the world's six floral kingdoms completely within its borders. This is the Cape floral kingdom, and it is marked by the fynbos family. About 8,000 of the species are concentrated in the small region of the Western Cape. It mainly consists of evergreen hard-leaf plants with fine, needle-like leaves.

Only one per cent of the South African territory is covered with forests. This area is almost exclusively on the humid coastal plains of the Indian Ocean and the adjacent cliffs. Grassland covers the largest area of the country. On the Highveld, the plant cover is dominated by different grasses, low shrubs and acacia trees. In the dry western part of the country, succulents like aloes and euphorbias can be found. Baobab trees can be consulted in the northeastern section.

The large areas of semi-desert scrub and grassland in South Africa might suggest certain poverty of flora. Aside from the fact that a tract of pristine prairie may hold up to 60 species of grasses, nothing could be further from the truth. There are five major habitat types: fynbos, forest, Karoo, grassland and savannah; alternatively, one may divide the country into seven biomes: Nama Karoo, Succulent Karoo, Fynbos, Forest, Thicket, Savanna and Grassland. Or 70 "veld types". There are other ways of classifying the various areas and botanic groups. Whichever is used, some 10% of the world's flowering species are found in South Africa, and it is the only country in the world that has within its borders an entire plant kingdom, the Cape Floristic Kingdom - 8 600 species, 68% of them endemic.

The Cape Peninsula alone has more species of flora than the whole of Great Britain. This south-western area of the country is the home of the fynbos, which is composed of ericas (heathers), protease and the grass-like ratios. The Proteas are the most spectacular in flower, the family including such species as the king protea (the national flower) and others of broadly similar shape, the pincushion lithospermum types and spiky leucadendrons. The colour range is vast. The ericas, the largest genus of flowering plants in South Africa, are more delicate, repaying close examination of their almost infinite variety of colour and form. One or other of these species will be found in bloom at almost any time of the year.

These share their Cape home with such beauties as the red disa orchid (one of 550 wild orchids in the country) which grows in the mountains, many irises, pelargoniums and much more. The pelargoniums, in particular, have contributed much to gardens all over the world, as have the arum lilies - the classic white species is from this area, the yellow and pink from elsewhere in the country. The world's gardens also have South Africa to thank for the agapanthus, gladiolus, Barberton Daisy and Gardenia thunbergia, to name but a few.

The Cape in the spring is a breathtaking sight, but even more surprising is Namaqualand. Dry, rocky and desert-like for the rest of the year, it yields its floral wealth for a short few weeks in the spring in dazzling sheets of colour. The golden yellow and orange Namaqualand daisies are predominant, but in between, they are a wide variety of flowers including the iridescent succulent mesembryanthemums. Colours here are particularly intense, although there is much fascination in less unusual species such as the quiver tree (the San, or Bushmen, used to make quivers from its woody stem) and the bizarre-looking tall succulent known as the "half men" (half human). And anyone especially interested in the abilities of plants to adapt to harsh circumstances in myriad different ways (not all are succulents) need not wait for spring to visit the area.

Although South Africa has more than a thousand indigenous trees, abundant species are relatively scarce in many parts of the country. But they are very much at home in some areas such as the Knysna, Tsitsikamma forest with its tall stinkwoods, black ironwoods and yellowwoods; and the northeastern region in Mpumalanga and Northern Province, home to the ancient cycads. Lowveld species such as the fever tree (so called because of its association with malaria areas). It is also in the north that one finds the famous thick-stemmed baobab, about which legend has it that it was accidentally planted upside down, which accounts for the odd shape of its branches. Then there are the forests of KwaZulu-Natal, which are also where the beautiful shade-loving orange Clivia, a now much-cultivated member of the Amaryllis family, is found.

The Eastern Cape is where another big orange (and purple) garden flower, now the emblem of the US city of Los Angeles, originates: the Strelitzia region. In much the same colour range the winters here are marked by the flowering of some of the country's 140 species of aloes. (The Eastern Cape's Greater Addo National Park, which will stretch 200km from the coast to the Karoo, will include samples of six of the seven South African biomes mentioned above, lacking only the Succulent Karoo.)

There is virtually no area of the country without its unique floral treasure or species of other kinds of beauty or interest, such as succulents that look almost exactly like stones (Lithops), mangroves, tree ferns. Traditional food plants and those that would kill you if you took a bite, and - surely one of the most promising fields of study in South Africa - an enormous number of plants of medicinal value. Some of these, such as the Aloe ferox, a purgative, was discovered to be medicinally useful by the early European colonists; much more has long been known and used by the indigenous African people. For all the more striking plants to be found, perhaps the landscape that most eloquently conjures up the spirit of South African flora is the typical savannah with its (often dry) grasses and more-or-less thickly scattered shrubs and thorn trees. Lingering images may vary widely from fynbos field to subtropical forest, but for many South Africans, the thorn tree is the nesting place of their hearts. 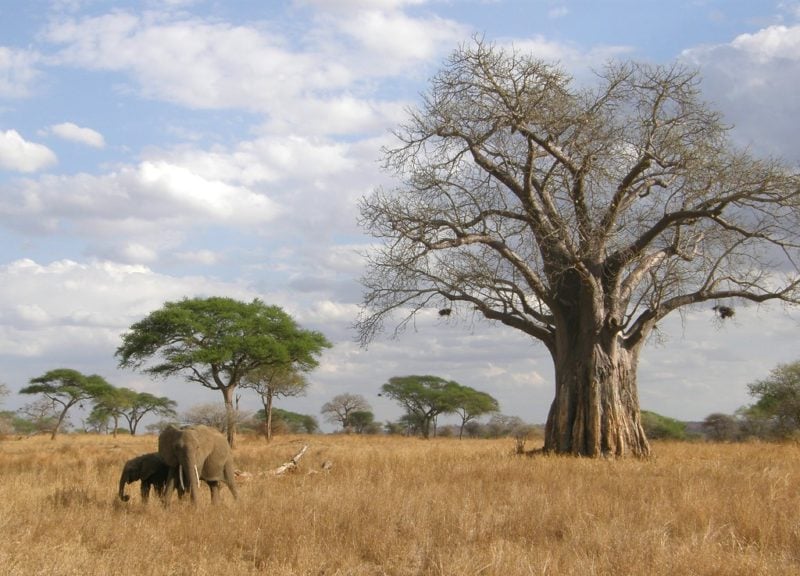