The Little Five on Safari

Locally, they are a common bird found in East Africa. Buffalo weavers nest in open, loose colonies. The nest is built high in a tree in a fork of branches. It is a large, rather untidy structure of twigs and coarse grasses. Social weavers (Philetairus socius) build huge nests, the most complex of all avian structures. The birds are sparrow-like in size and appearance. The individual birds join forces and weave a grass roof in the branches of a tree. They then create vertical tunnels upward that widen into chambers just under the ceiling.

Wherever you go in the parks and reserves with dry bush or savanna, there will be trees festooned with the nests. There are many species of weavers in Africa, some common and others are rarer. Among these, the best nest-builders are those who build flask-shaped nests. The males have black and yellow plumage while the females may share their mate's colours or have dull yellow plumage. Some species in this genus (Ploceus) are difficult to distinguish. Buffalo weavers are the least accomplished nest makers of the African species. As weavers go, they are large, up to nine inches (23 cm) long. Usually, in small groups, they reside in arid areas. Their nests are thorny structures with side entrances facing different directions. The Buffalo-Weaver is common in a dry bush and easily recognised from its black, white and red colouration. The Common Buffalo Weaver male is black. 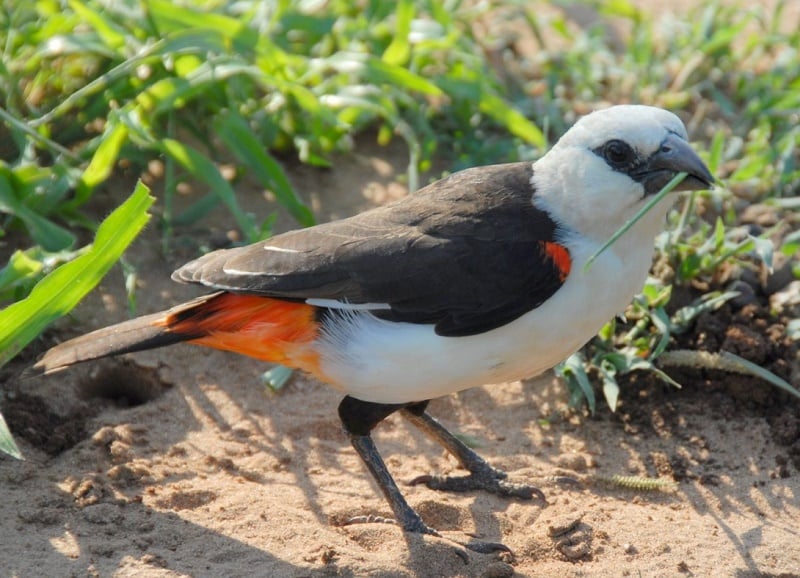 Rhynchoycon and Petrodromus are widely confined to lowland and montane forests and dense woodlands, while Elephantulus and Macroscelides are found in more arid lowland plains, such as savannahs, scrublands, rocky outcrops, and deserts. In nearly all cases, sengis are found in low densities compared to many other small mammals (FitzGibbon 1995, Perrin 1995b). At low latitudes reproduction is continuous, but at higher latitudes, it is seasonal (Neal 1995). All sengis prey on invertebrates, although most soft-furred species supplement this diet with small fruits, seeds, and green plant matter (Rathbun 1979, Kerley 1995). Snakes, raptors, and carnivores are known predators of sengis. A wide variety of parasites is hosted by macroscelidids (Fourie et al. 1995). Shrews are probably the most successful of the ground-dwelling mammals known as insectivores. There are around 275 Shrew species in all. Even though shrews and other small mammals such as moles and hedgehogs are placed together in the order Insectivora, they are not related. Their size ranges from mouse to rabbit size. 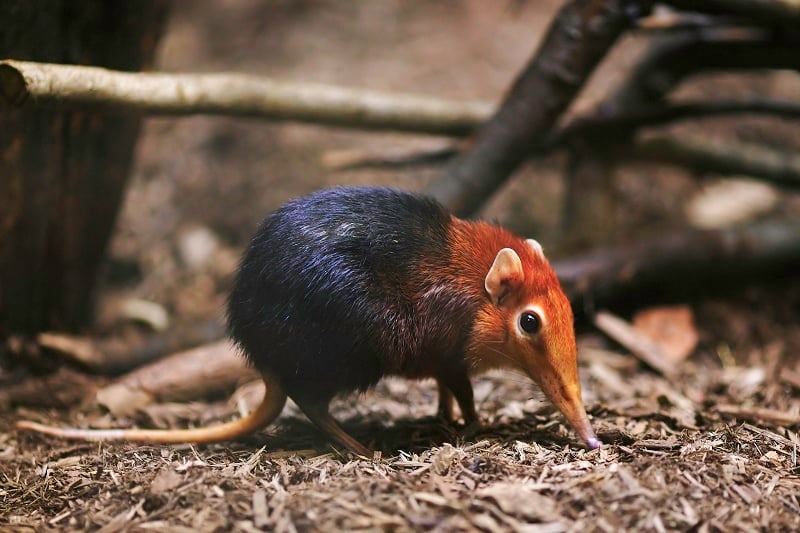 The leopard tortoise is approximately 2 feet long which is the biggest turtle in Africa. It weighs 50 to 100 lbs. Its name comes from the colour of its shell which has black and yellow spots, look like a leopard. The young have dark brown or black leopard patterns on their shells while adults have smaller spots. Their head, legs, and tail are brownish, yellow. The shell is shaped like an upside-down bowl. It is hard and bumpy. There is a V-shaped notch in the front of the shell. Leopard tortoises have thick club-like back legs that have scales with claws on their toes. They don't have webbed feet. The head, legs, and tail can be almost entirely drawn under the shell. Leopard tortoises live from Eastern Africa to Southern Africa. Their habitat is a Savannah, recognised which is grassland, with rivers. In the wild, leopard tortoises usually do not mate until they are between 12 to 15 years old. In captivity, the animals often grow faster and can be ready to mate between six and eight years. Male leopard tortoise has recognised their long tails. When the female is ready to lay her eggs, she digs a hole 12 inches deep with her hind feet and lays 5 to 30 white eggs at three-week intervals for twenty weeks. They hatch one year later. The antlion larva digs its pits in dry, sunny spots sheltered from wind and rain, particularly on south-facing slopes. The soil must be light to shift. Pushing itself backwards, the larva first draws a circle on the ground. Then, digging deeper and deeper, it spirals in toward the centre. The dirt that is dug out is thrown out energetically with the head. After only about 15 minutes, the antlion has made a funnel-shaped crater in the earth. The antlion larvae prepare the sides of their pits with fine sand or soil particles so ants that fall in can't climb out, and land in the jaws of the "doodlebug" is waiting at the bottom. It buries itself at the bottom so that only the head, with opened jaws, can be seen, and there it waits for its prey. Antlion larvae eventually pupate in the soil, becoming adult insects that look somewhat like dragonflies, except that they are more fragile and are weak fliers. Antlions are beneficial to man because of their ant diet, and they cause no problems. 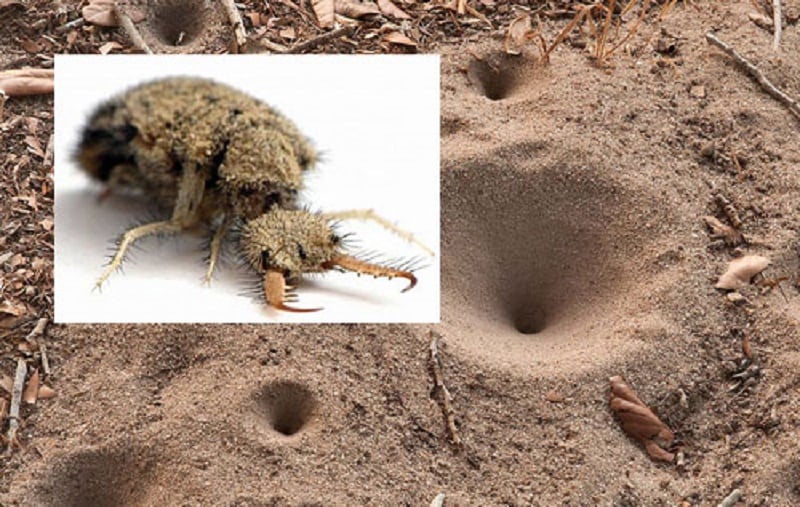 The Rhino Beetle is among the largest beetles. It is the largest beetle in its habitat, but not in the world. In all horned beetles, the huge spikes are used by males in combat rather than for defence against predators. Rhinoceros beetles grow to be between 1 and 2 1/2 inches long. Both sexes have horns, making it difficult to distinguish between them. Male beetles use these horns for fighting rival males over feeding sites or females. Rhinoceros beetles also use their horns for digging, climbing and mating. 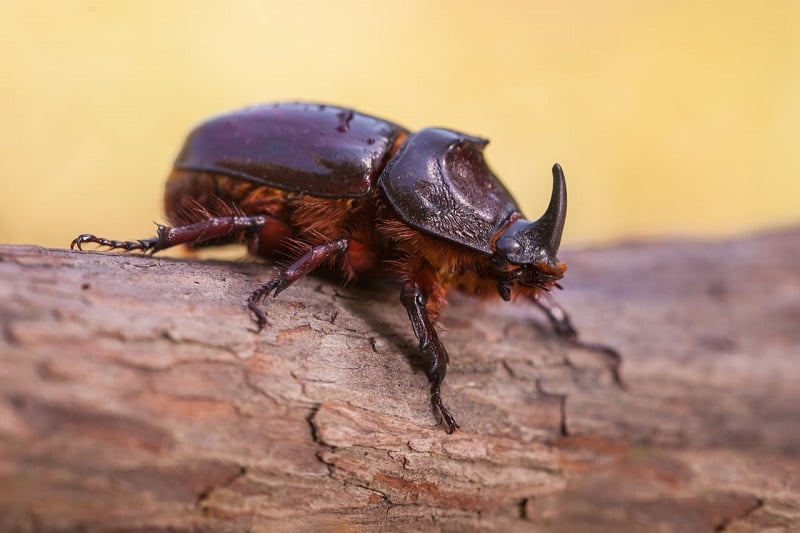