At the southern tip of Africa, where two of the world's most magnificent oceans converge, a total experience of the land, sea and the rainbow culture of the Western Cape offer you the most exciting land-based whale watching venues in the world! Each year Southern Right whales migrate into the coastal waters of the Western Cape to calve and nurse their young. The animals, often mere metres from the shore, provide unsurpassed whale watching opportunities between June and November. Humpbacks migrate through the region between May and December each year, while Bryde's whales are found slightly further offshore all year round. At least 37 species of whales and dolphins can be found in the waters off South Africa. However, the Route is most famous for encounters with southern right whales, humpback whales, and several coastal dolphin species. You can also see African penguins, Cape fur seals, black oystercatcher birds and a variety of other marine life. The Cape Whale Route stretches for 900 km from Doringbaai on the West Coast to Storms River Mouth in the Tsitsikamma National Park. Places from which to observe these gentle giants include Hermanus, where the Whale Cryer informs on whale sightings and where whales come into the old harbour to calve, then all along the coast to Gansbaai, further down to Cape Agulhas, Struisbaai and Arniston, where whales come into the protected waters.

Whales tend to show off in the following manner: Blowing: A sound made when expelling air through the blowhole. This is accompanied by a spout of condensed water vapour. This, however, is the regular breathing pattern of the animal. Breaching: Leaping out of water in an arching back flip and falling back on their sides or back with a resounding slap. This is believed to be a way of communication, exercise or possibly to scratch the parasites off that live on whales. They can breach from 3 to 8 times in succession. South Africa retains its position as the fifth fastest-growing whale- watching destination in the world. Only 16 permits have been issued countrywide to ensure regulation of the industry and minimum intrusion on the whales who come to the warmer waters of the south to mate. What you might see: Humpbacks, Southern Rights, Bryde's whales, Orcas. 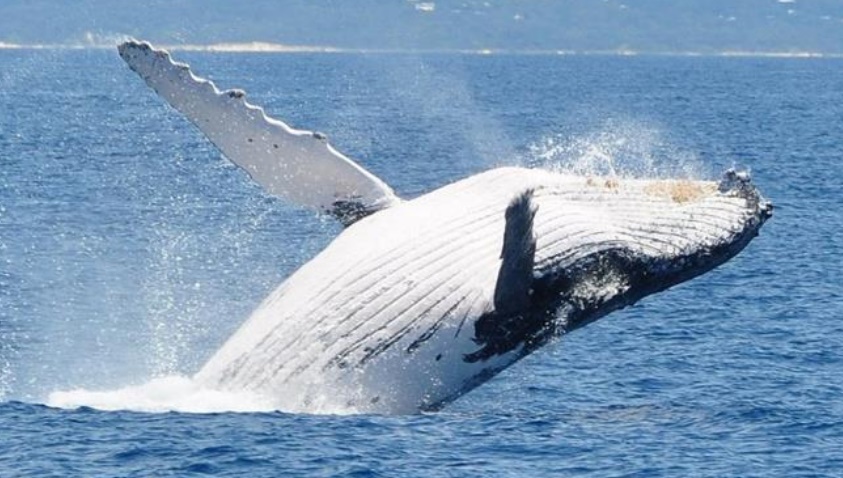 When to go: July to November Viewing options: Shoreline, boat

From July to December whales can be seen on the shores of South Africa. Holidaymakers who have been in the Kruger National Park and are visiting the Western Cape will be able to see all the 'BIG SIX'. That means besides the big five mammals lion, buffalo, rhino, leopard and elephant the Whale as well. Most common in South African waters are the Southern Right Whales. The name originated when these creatures have been hunted extensively. They have been the 'right' whales for hunting because they have been slow and did not drown after killing. That made it easy for the whale hunters. Today the estimated number of Southern Right Whales is about 7000, approximately 2000 of them are on the shores of South Africa. The birth rate is 7 %, that means every ten years the population doubles (for comparison: the world population grows by 3%). From mid-July, the whales are coming back from the Antarctic. They are staying here until the beginning of December to calve, breed and mate in the safe and warm waters. The right whales are baleen whales with bow-shaped lower jaw and a head that is up to one-quarter of the body length. The head is hairier than most whales; up to 300 hairs are found on the tip of the lower jaw, and 100 are on the upper jaw. There are also callosities (a series of horny growths) behind the blowhole, on the chin, above the eyes, on the lower lip, and on the rostrum (the beak-like upper jaw). Right whales are similar to bowhead whales but smaller. Right whales are abundant in blubber and have two blowholes. The eyes are minuscule, and the lips are gigantic. They were named by whalers who considered them the "right" whales to hunt since they were rich in blubber and easy to catch (they are relatively slow swimmers) as they floated after being killed.