Few birds can match the striking appearance and aerial prowess of the Bateleur. It is undoubtedly the most strikingly marked of the world's eagles and symbolic of Africa's wild places. The most likely place for you to see them is in the Kruger Park 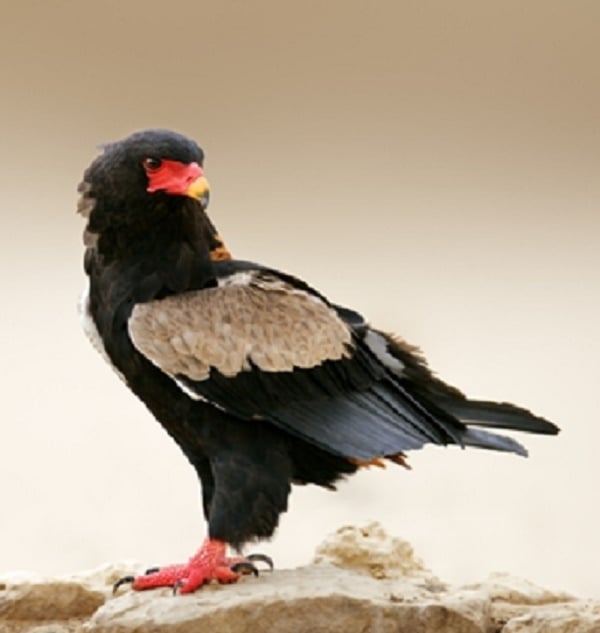 With their long curved bills and happy disposition, hornbills are among the most conspicuous of African birds, and also among the most interesting. Although not brightly coloured - most have black, white or grey plumage - many species have colourful bills or bare facial skin, and all are beautiful birds. The males of many species possess a raised section on the upper mandible, known as a casque, and this probably plays some role in display or mate selection. The most likely place to see them would be in the Sabi Sands. 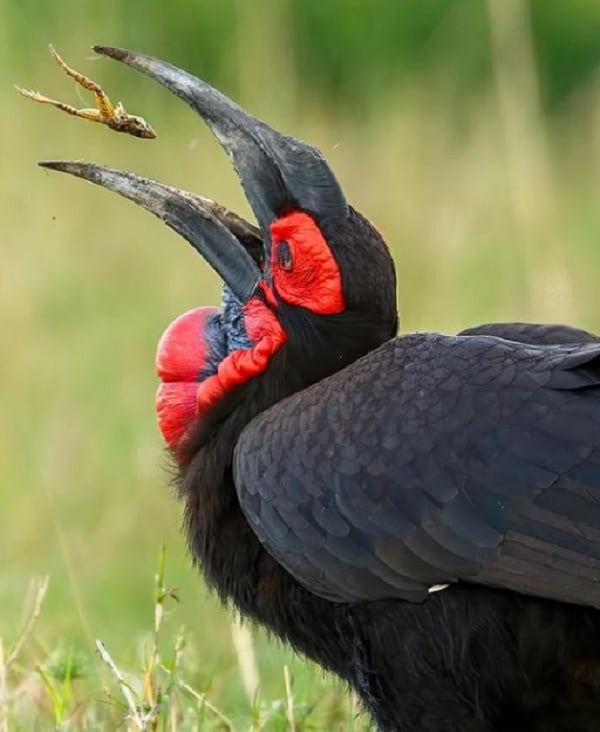 Turacos are uniquely African, with 23 species recognised by most authorities. The forest-living species are undoubtedly among the most spectacularly colourful of birds, while the savanna-dwellers (known as "go-away birds") are predominantly grey in plumage. In South Africa, these birds are better known as lorries. All are frugivores, specialising in fruit (mainly figs) and sometimes feeding on leaves, buds and flowers. They are usually gregarious and frequently associate with Green Pigeons, parrots, hornbills and barbets, with individuals and groups often returning day after day to the same fruiting tree, until the crop is exhausted. The most likely place to see them would be on the Garden Route. 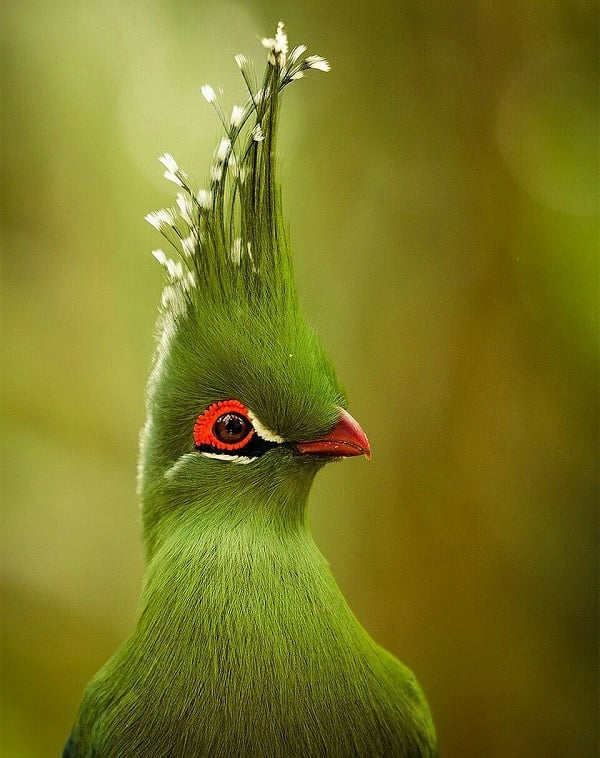 With their haunting calls and silent flight, owls are among the most elusive and misunderstood of all birds. Legends and fables from across the world describe the owl as a supernatural being, often associated with death, while in other cultures, the owl is revered as being “wise”. Perhaps their forward-facing eyes - just like those of a human - are partly responsible for the attention they have received from people through the ages. The most likely place for you to see them is in the Timbavati 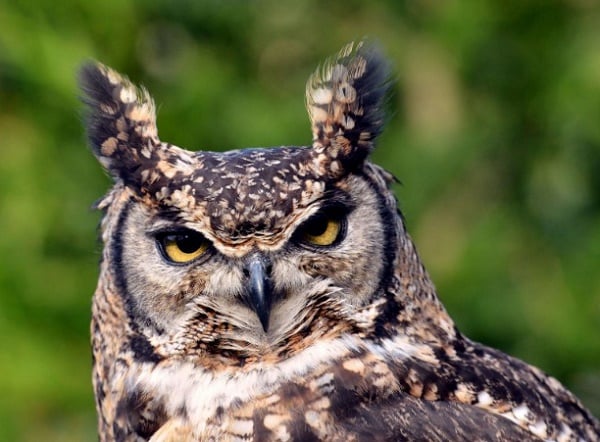 As their names suggest, Woodpeckers are birds which specialise in carving into the wood. This they do to extract food (most species are insectivorous) and also to excavate nesting chambers. There are 221 recognised species in 28 genera, and they occur throughout the world except in Australasia. Although all members of the family confirm to somewhat standard body shape, there is considerable variation in size with the tiny piculets measuring less than 10cm and the massive Imperial Woodpecker (sadly thought to be extinct) up to 60cm. Southeast Asia’s Great Slaty Woodpecker measures 50cm from the tip of its pointed bill to its hooked toes. In temperate regions and Africa, woodpeckers are rather drably coloured, with olive green, brown and black being dominant colours; although males typically have bright scarlet crests or malar stripes. In tropical America and Asia, woodpeckers are much more glamorous with brilliant yellows, greens, and reds commonplace. The most likely place for you to see them is in the Timbavati 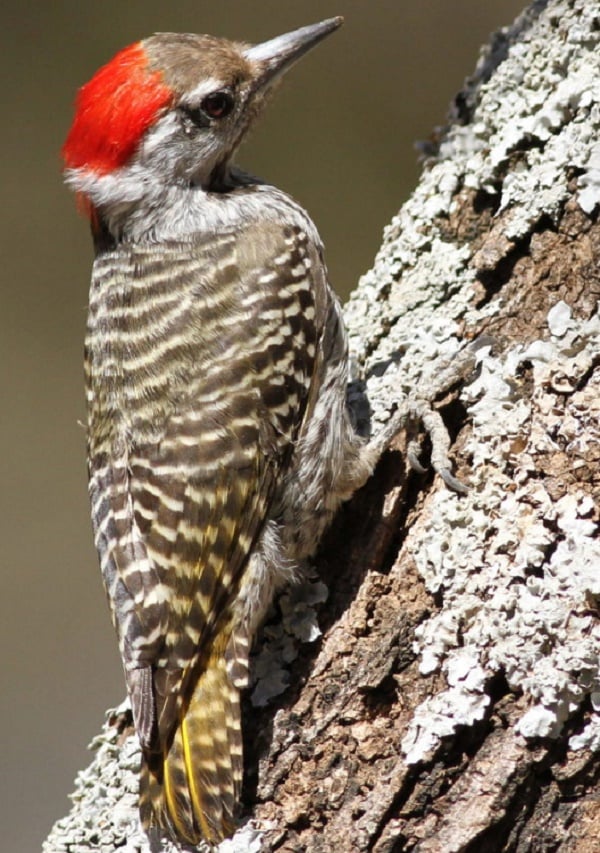 Along with snakes, spiders, hyenas and sharks, vultures are regarded as the "bad guys" of the animal kingdom. All creatures do, of course, have a role to play in nature, and it is only through the personal and emotive thinking of humans that labels such as "evil", "horrid", "cruel" and "merciless" arise. No animals possess such traits - they are all engaged in a struggle for survival which sees them trying to optimise on feeding and reproductive opportunities within the ecosystems in which they have evolved, and the particular niches that they occupy. 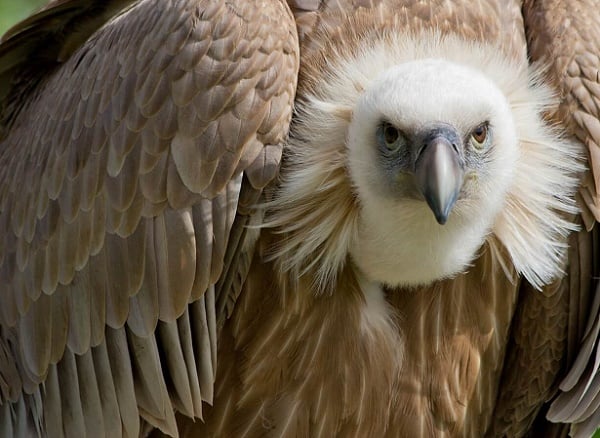 Basket cases Weavers (Ploceinae) are members of the finch tribe. Most species are seed-eaters with short conical bills, but some are insectivorous with dagger-like bills. Almost all members of the family have bright yellow plumage, with males acquiring strong black facial patterns in the breeding season. A few species have a red feather, and some are entirely black. They are not in the least musical, but their harsh rasping notes are characteristic of many habitats, including suburban gardens. 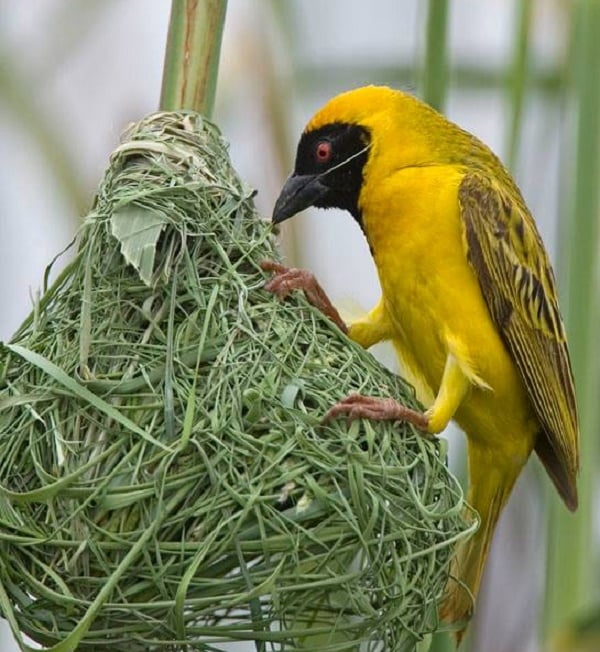 Kingfishers are among the most brilliantly coloured of all birds, and many have strident voices and dramatic courtship displays. Most species have some blue plumage, and many have red bills. Some are confiding and adapt well to man's alteration of natural habitats, and can even be seen in local gardens. 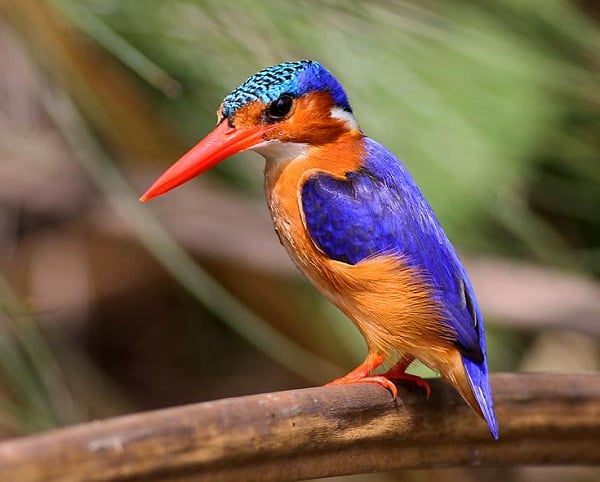 Herons, egrets and bitterns all belong to the same family - Ardeidae. They are medium-sized to large birds commonly associated with water. Most are long-legged and long-billed, with slender bodies. In-flight, they can be distinguished from storks or ibises by their kinked (S-shaped) necks. In general, those species which are predominantly white are known as egrets and those who are not are herons. Bitterns are short-legged, cryptically plumaged, retiring and seldom seen. 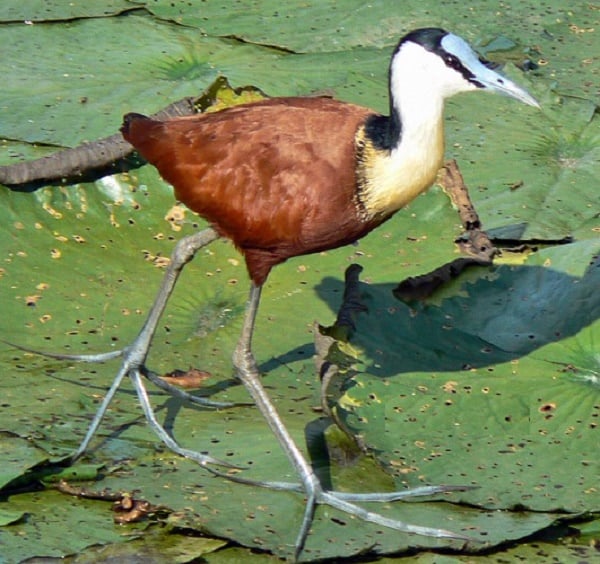 Closely related to Kingfishers and Rollers - and indeed just as colourful - Bee-eaters are skilled and specialised predators of bees and other winged insects. Their prey is taken in mid-air, usually after some accomplished acrobatics, and often brought to a perch to be immobilised and swallowed. Watching these bold and energetic birds is hugely entertaining, and because many species are quite relaxed in the presence of man, photographic opportunities come readily. For these reasons, Bee-eaters are among the most admired of birds. The most likely place for you to see them is in the Masai Mara 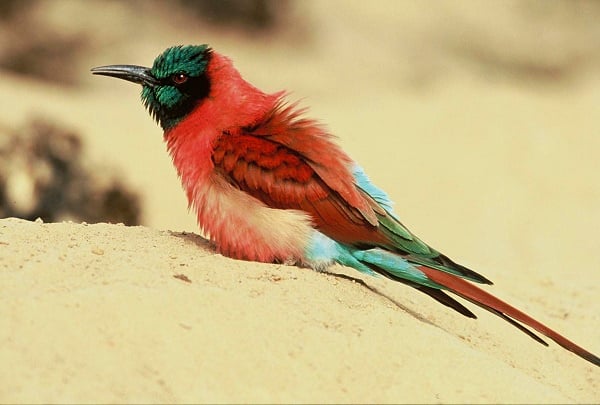 Cranes are among the most graceful and enchanting of all birds, but also among the most endangered. Fifteen species occur across the world, on all continents except for South America. The North American Whooping Crane was perilously close to extinction in 1941, with just 16 individuals remaining, but concerted and imaginative conservation efforts have brought the population up to around 150 birds. 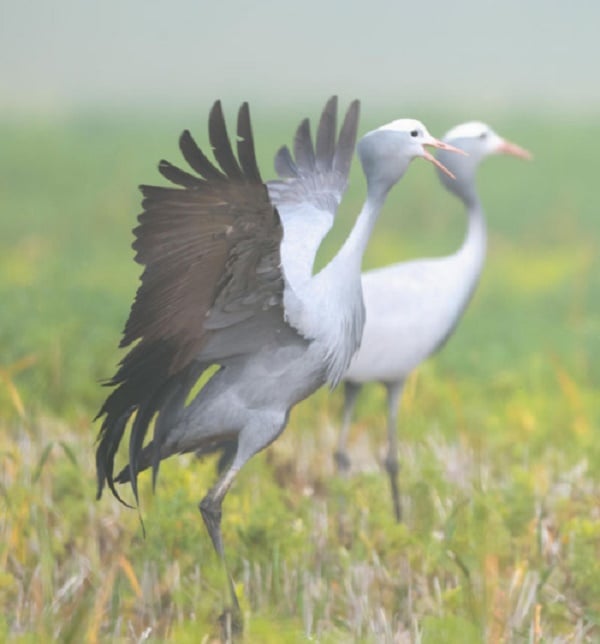 The Ostrich is the largest living bird and also the heaviest. It is entirely flightless but able to cover great distances with speed and stamina on its sturdy legs. Due to its size and preferred habitat of open country, it is regularly encountered in wildlife areas where it frequently associates with antelope, zebra and other herbivorous animals.

Closely related to woodpeckers, barbets are colourful and vociferous birds. Many species adapt well to man's alteration of the environment and our favourite garden visitors. As a family, they are thick-set birds with large bills set in a rather large head. In common with woodpeckers, barbets feet are zygodactylic, with two toes facing forwards and two back. This configuration allows them to cling easily to trees to excavate their breeding holes.

For many people visiting African parks to see large mammals, the first bird which is likely to attract their admiration is the Lilac-breasted Roller. Few photographers can resist an attempt to capture the bird on film. This beautiful, dove-sized bird is common in savanna and open woodland, where it perches conspicuously on outermost branch tips, termite mounds and treetops. With its electric blue wings, pink and powder blue underparts, and elongated tail feathers it is indeed a magnificent creature. Seeing this bird swoop from its perch in pursuit of a flying insect is a dazzling sight.

Across the world, ducks and geese are symbolic of wild places, even though an increasing number are adapting to human-made environments. Together with swans, the ducks and geese belong to the family Anatidae, which are sometimes known collectively as 'waterfowl'.

Storks are large, long-beaked and long-legged birds with amazing soaring abilities. Although they bear a superficial resemblance to herons, they are not related to them, nor to ibises. In fact, the recent analysis supports the view that the closest relatives of storks are the condors and other New World vultures (in addition to skeletal similarities which suggest a common ancestor, both groups of birds share the habit of defecating onto their legs as a cooling mechanism).

Due to their unusual shape and striking pink colouration, flamingos are immediately recognisable. There are five species of these remarkable birds. The Chilean, Andean and Puna Flamingos are confined to South America, the Lesser Flamingo ranges across Africa (but also has populations in Arabia and India), and the widespread Greater Flamingo occurs on five continents. They are thought to be one of the most ancient of bird families, with fossils having been found across the globe including Australia, where no modern-day flamingos are found despite there being ideal environmental conditions.

The African Penguin is endemic to South African waters. They are found on 24 islands around Southern Africa, from Namibia to St. Croy island at Port Elizabeth but nowhere else in the world. There are three mainland colonies; Simon's Town, Betty's Bay and Namibia. The African Penguin is a cause for concern as it is listed in the Red Data Book as an endangered species. There were once more than 1.2 million in number in 1930, but by the end of the 1980s, there were less than 200,000. To many, the Jackass, Blackfoot or African Penguin Spheniscus Demetrius is a cute little bird, beloved of cartoonists and refrigerator advertisements. Without the penguin, however, South Africa as we know it would be entirely different. In the early days of the establishment of the fort at Cape Town, the Penguins killed at Robben-Island colony in Table Bay kept the Dutch from starving. Since the settlement was initially founded to provide provisions to passing ships of the Dutch East India Company, the company would probably not have bothered with attempting to re-establish that, that could not even feed itself.

Throughout Africa, shrike's of numerous species enliven woodlands, forests, gardens and scrublands with their ringing calls and often bold presence. Shrikes fall into several groups or subfamilies. They are all primarily insectivorous, but some of the more abundant species frequently prey upon the nestlings of other birds, lizards and other small reptiles. All have robust beaks, often with a vicious hook at its tip. Most appear to pair for life, and the personal duet calls are a way of keeping in touch and maintaining the 'marital' bond.